One awakens early due to the stirrings of pilgrims anxious to get going and inconsiderate of others. Once awake you face the decision to ignore them and rest more or get going. Today I was facing a tough choice of walks. Due to the fact that this is a sparecely inhabited region of Spain, there are few albergues. I knew that I would have to stop after 16 km or walk 33. I decided to go with the spirit of the Camino. The Camino and your body will decide.

Starting in the dark from a small town is an interesting assault on the senses. It was only 45 degrees out but the smart thing to do is dress for the temps later. The air is cold on your flesh but the weight of your pack and the pace of your walk warms you quickly. The town is silent save the tic tack of your poles as you walk through the streets. The town smells like the usual mix of town smells as you search among the street lights and dark corners for the happy sight of a yellow arrow indicating the Camino. Miss one arrow and you are off to who knows where. Leaving Sahagun one must pass some of the Camino’s most important relics and pure examples of Mudejar – the mixture of Christian/European architecture and the brick work and the artisans of Islam. Crossing the river Cea over the Roman bridge you are now plunged into darkness and the headlamp lights the way along the “senda”   It is deathly quiet save the crunch of your boots and the tap of your poles on the gravel path. Your focus is on the small lighted area in front of you and you once again drop into the rythem of the Way and your thoughts.

The scenery does not vary much. I became aware of my shadow. It appeared two hours after I started and was always in front of me. Walking West the first sun to hit you casts a long shadow. As the day gets longer, the shadow gets shorter and so does the journey for the day.

Seven hours of such rythe 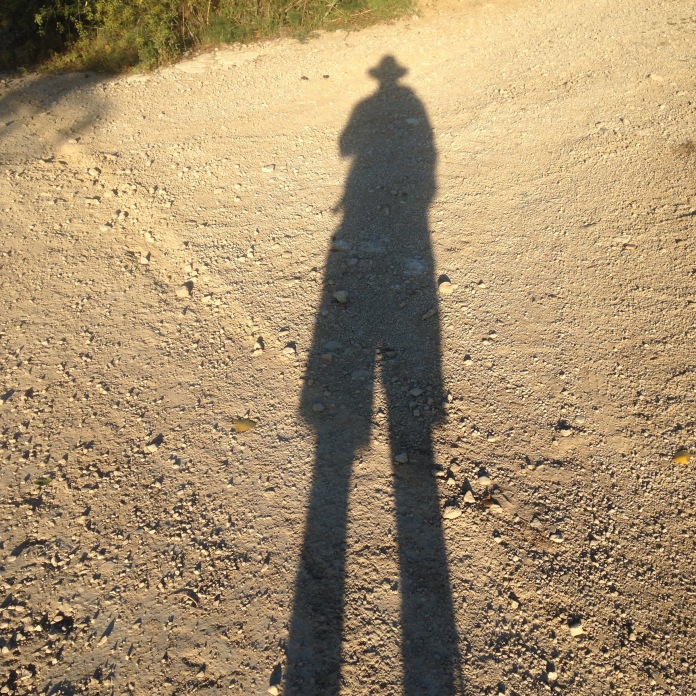 m later. I arrived at an albergue in Reliegos 33 km away. It’s all good.

2 thoughts on “A long shadow”